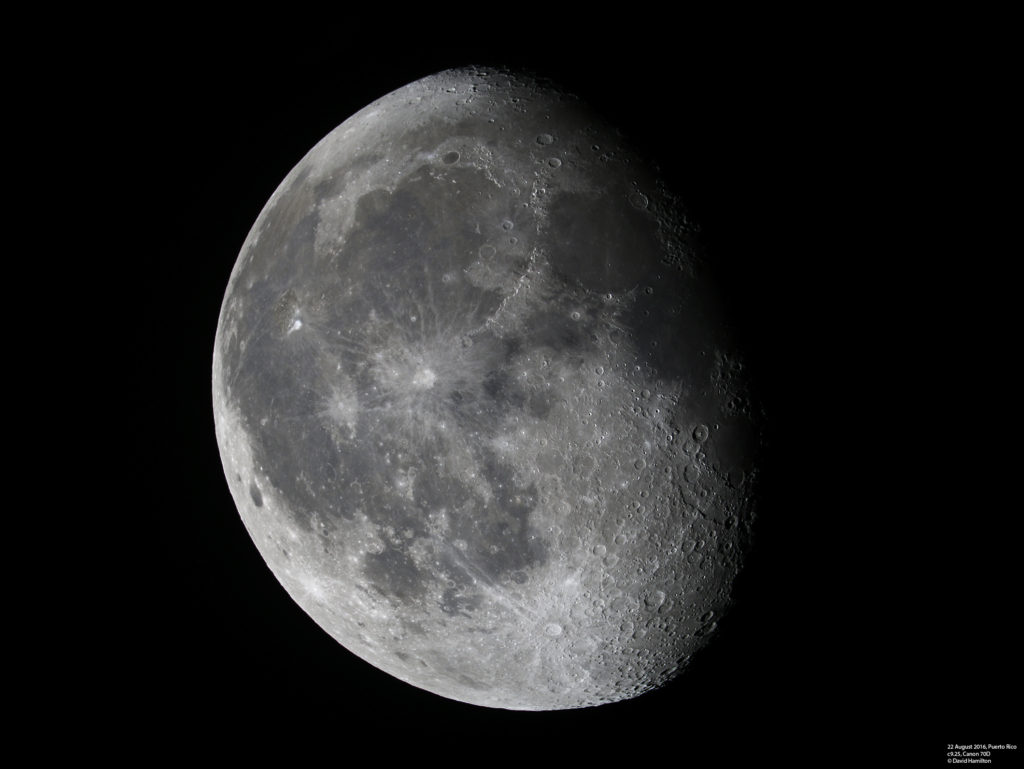 With the telescope already setup I decided to do a lunar study. It had been a while since I had last done this and I wanted to try some high resolution close up images. The moon had still not risen sufficiently for me to image it and so I waited until after midnight before heading out. This is what the moon looked like (clicking on the picture above will load a higher resolution image).

For those that don’t know I have a 9.25″ Celestron telescope, which essentially means that I have a 9.25 inch mirror to capture the light and reflect it into my camera or eyes (if I’m visually observing). The larger the mirror, the more resolving power you have and the fainter the objects you can see.

So in the above image north is up and we can see huge impact craters that show the violent history of the moon. These impacts were formed when asteroids and comets collided into the surface. To put the violence of this into perspective, the near side of the moon (i.e. the side that continually faces us) has over 300,000 craters 1 km or larger. 1 The surface texture also varies with the darker areas of the moon being known as maria (latin for seas) that formed from ancient lava flows in huge impact basins. Interestingly nearly all the maria are on the near side of the moon.

Seeing the whole moon first is a good way to put into perspective the following images that are of a higher magnification. You’ll be able to identify where on the moon I took them. For the high magnification shots I use a camera called ASI224MC which is a high speed camera especially for planetary imaging. I use this camera attached to a x2 lens, on my telescope to produce the images that follow. It’s not just as simple as clicking and taking a single photograph due to atmospheric effects. But more about that another time.

The lunar terminator is what we call the division between the illuminated part of the moon and the dark part. So this image below was taken at the very north of the moon right beside the terminator (click to open in full resolution). 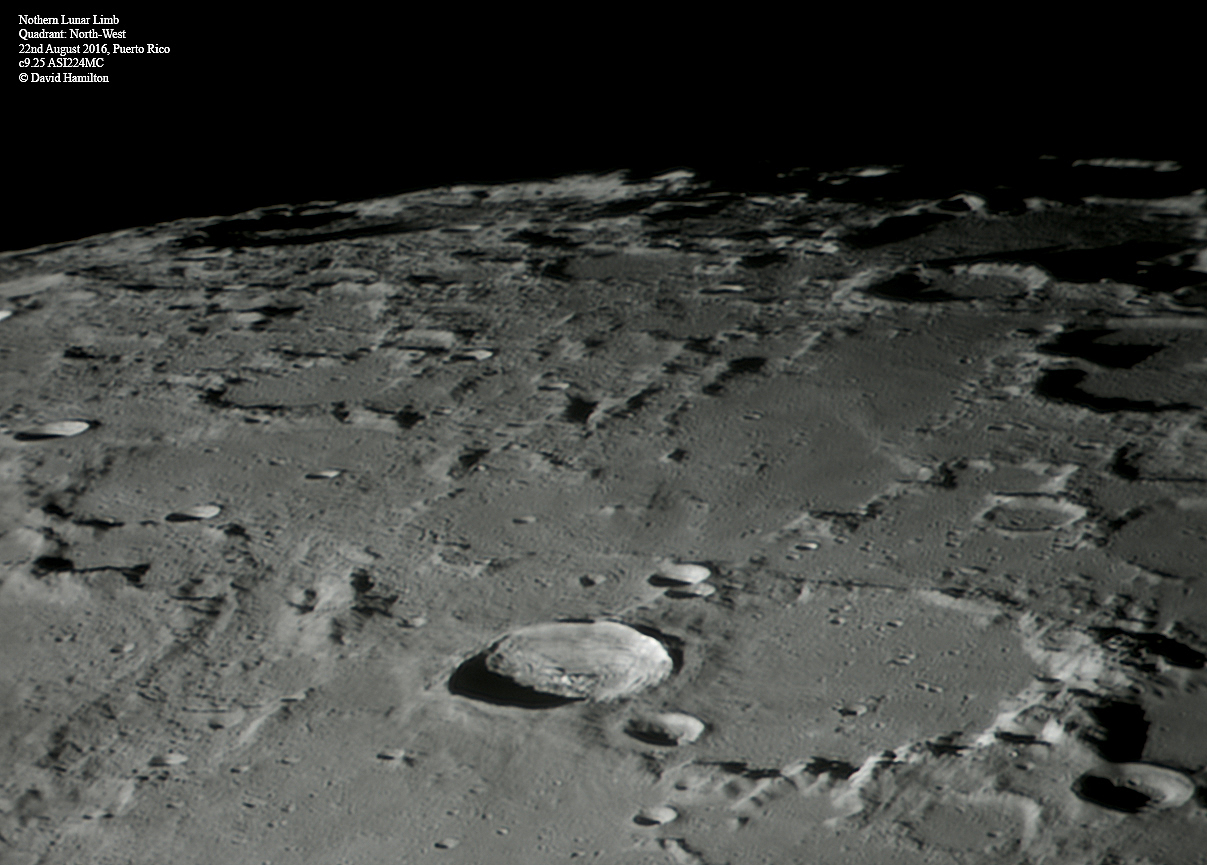 The northern limb of the moon beside the terminator. Imaged with a c9.25, x2 barlow and ASI224MC camera.

In this image we can see the well defined, larger crater in the foreground called Anaxagoras (named after a 6th century BC Greek philosopher). However, we also see ghost craters, these are the remains of craters that have been filled or partially covered by lava flows in this area. We see the crater rims but the centers are smooth and normally show evidence of smaller impact craters within them.

We can also use this image to guess at a timeline of events. The crater Anaxagoras is in the middle of a ghost crater’s rim (crater Goldschmidt), it must therefore be a more recent impact than that of Goldschmidt, otherwise Goldschmidt’s impact would have damaged Anaxagoras’ rim. We could also guess that it happened after the lava flow since it did not get filled up as all the other craters in the area did (though this could depend on Anaxagoras’ rim height which may have been too high for the lava to flow over). So the basic timeline could be Goldschmidt impact, then eventually the lava flow and then finally Anaxagoras impact.

For people new to imaging the moon, the lunar limbs are fun to image because it almost feels like you are flying over the lunar surface. So now to compare the southern lunar limb to this northern one.

The South of the moon is a great place to see a very large variety of well defined crater impacts. These crater impacts haven’t been affected with lava flows in the same way as the image above and we can see crater walls, the mountains in the center of craters and the depth of craters. The image below (click to open in full resolution) is in the correct orientation – though some people find it easier to look at it from the other way up. 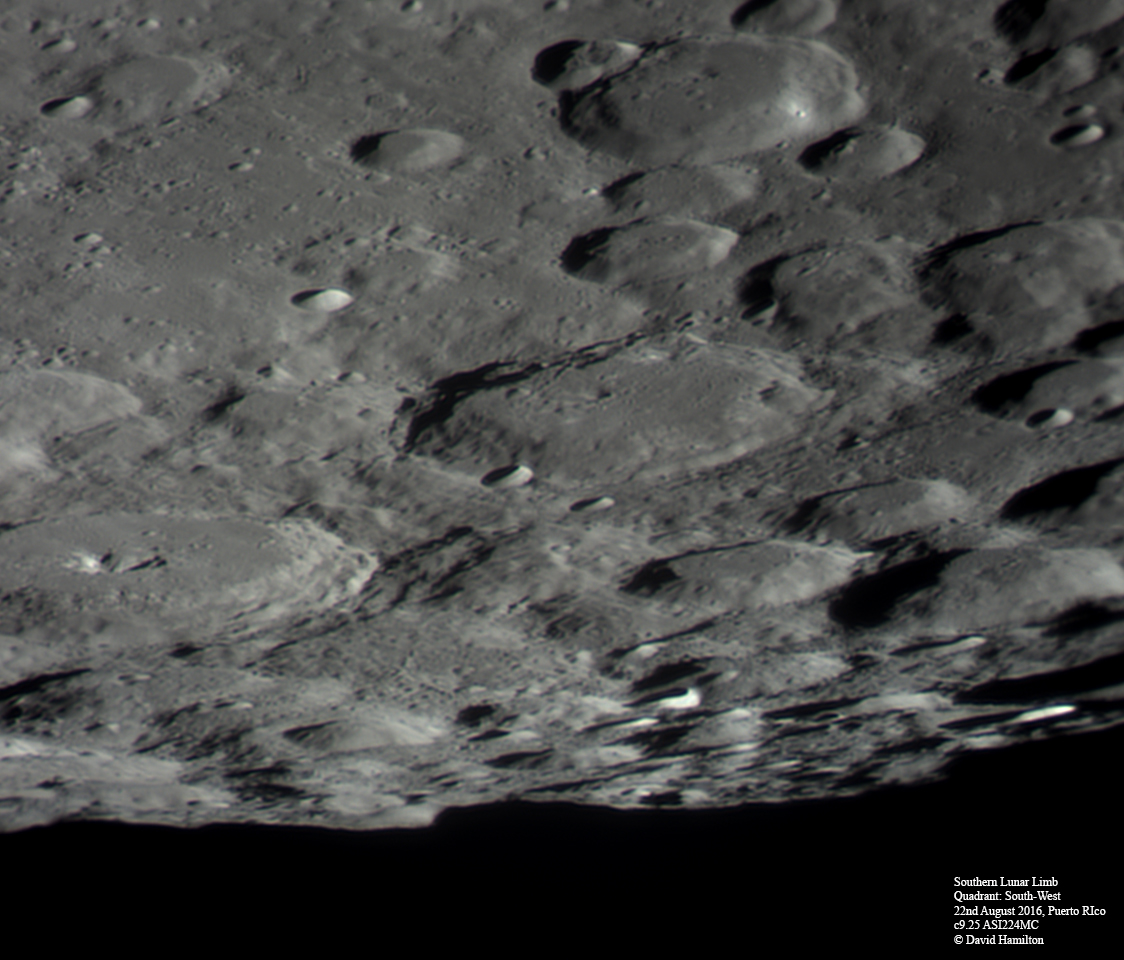 The Southern limb of the moon shows massive crater impacts that are well defined.

The large crater in the center of this image is known as Curtius that has a diameter of 96 km (58 miles) and is 6.8 km deep. It was named after a 17th century German astronomer called Albert Curtz. To put this crater into perspective, the meteor crater in Arizona is 1.18km in diameter and 170 meters deep and hit with a force of 10 megatons… this crater is virtually 90 times as big so we can imagine the forces involved. The other large crater on Curtius’ left (from our perspective) is known as Moretus and has a central mountain 2.7 km high. 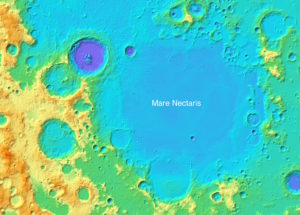 The impact basin Mare Nectaris is a 350 km in diameter depression on the moon that has been filled with lava. Image credit: NASA LRO

My image below is a panorama of the craters Theophilus, Cyrillus and Catherina that can be found close to the terminator just below the equator of the moon (on first image). These craters border on the Mare Nectaris (the sea of Nectar) which is the dark circular area to the right. The Mare of Nectaris is actually a huge impact basin from a colossal collision in the moon’s past that caused a depression that was filled by a lava flow.

From the top of the image to the bottom the craters are in following order; Theophilus, Cyrillus, Catharina and finally Polybius creeping in at the very bottom.  Clicking on the image will open it up to full resolution which may take a little while to download. 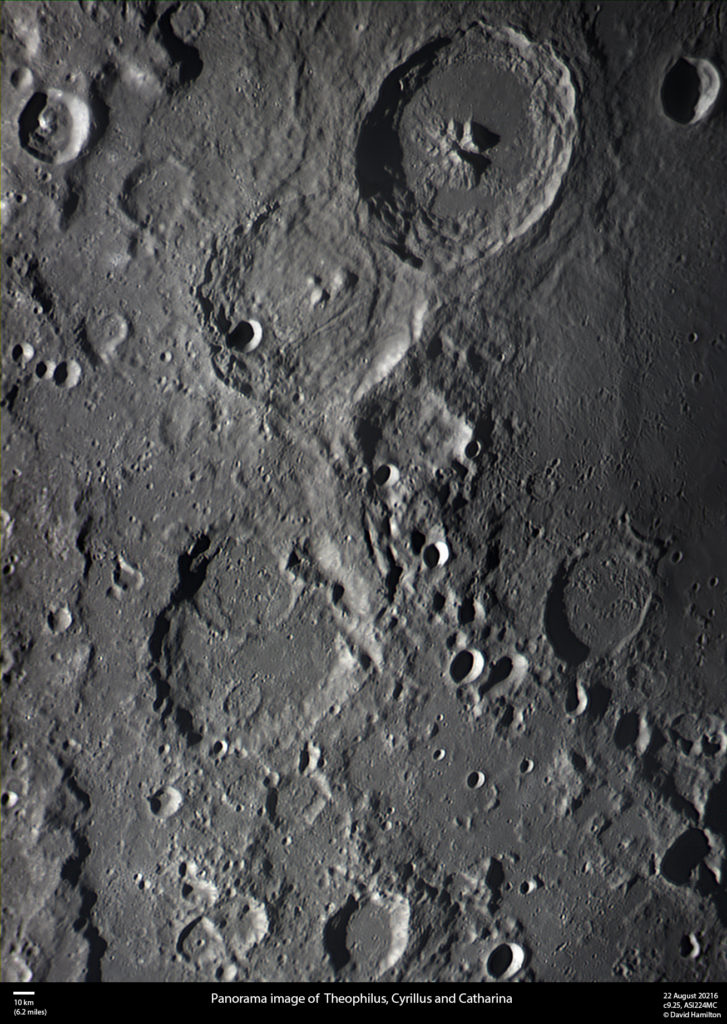 Theophilus (named after a Greek philosopher) is a deep crater, 4.2 km (2.6 miles) deep in fact, and has a central mountain range with 4 peaks that rise up 1.4 km (0.9 miles) from the bottom. Its walls are terraced from massive collapses after the impact and it is these collapses that play a role in the central mountain formation. It is about 100km in diameter.

Cyrillus (named after another Greek philosopher) is older that Theophilus as can be seen by Theophilus’ overlap onto Cyrillus’ crater rim. It has 3 mound like central peaks. The image below is a beautiful image from the Lunar Orbiter 3 which looks over the southern crater wall of Theophilus (bottom of image) and into Cyrillus capturing the 3 central rounded peaks and the south-eastern part of the crater wall. Click for the full resolution.

Cyrillus’ 3 central peaks and southeastern crater wall (to the left) as imaged by the Lunar Orbiter 3. Theophilus’ southern crater wall is in the foreground of this image.

So all in all it was a successful night of lunar imaging. There are still plenty of other interesting formations on the moon and interesting craters to capture the next time. In its past the moon must have put on quite a fireworks display with all those impacts. Now it’s kind of an orbiting history book!