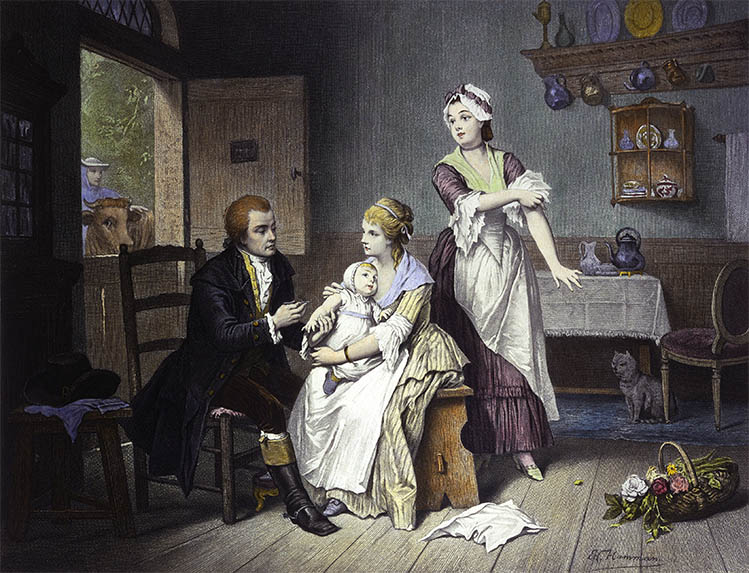 This is the story of Edward Jenner, who saved more lives than the work of any other human being. His discovery eventually led to the eradication of smallpox that took 300 – 500 million people to the grave in the 20th century alone.1 The son of a church vicar, he was a devout Christian and days before his death in 1823 the following was recorded by his friend and biographer John Baron:

He frequently expressed his regret that mankind were so little alive to the value of vaccination. Among the last words that he addressed to me, not many days before his fatal seizure, he used this remarkable expression : “I am not surprised that men are not thankful to me ; but I wonder that they are not grateful to God for the good which he has made me the instrument of conveying to my fellow creatures.” 2

Surely this must resonate with us in light of the present controversy over vaccination and I wonder whether over 200 years since his discovery he would still regret how some feel.

It’s the year 1796, the American Revolutionary war against the British sparked by the American declaration of independence signed in 1776 is over. A new nation has been born and the last British troops are leaving. But the war against smallpox continues both in America and across the Atlantic ocean in Britain and independence has still not been won. This highly contagious disease with a mortality rate of 20 – 30 %, was responsible for a third of all blindness in the world and the terrible scarring of survivors.3 In 50 years time British historian, Lord Thomas B. Macaulay will describe it as:

the most terrible of all the ministers of death….the small pox was always present, filling the churchyards with corpses, tormenting with constant fears all whom it had not yet stricken, leaving on those whose lives it spared the hideous traces of its power, turning the babe into a changeling at which the mother shuddered, and making the eyes and cheeks of the betrothed maiden objects of horror to the lover. 4

A doctor in London, Edward Jenner, is in the process of bringing a new discovery to the fore of the scientific community and the tide of war is about to change. 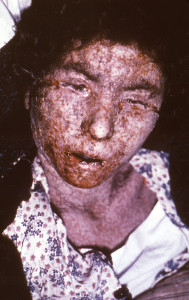 At this time the defense against smallpox was known as variolation, a practice that dates back to 16th century China, where scabs of smallpox patients were collected, kept for a time, crushed into a powder and blown up the nose of those yet to get smallpox.5 The reason an individual would be deliberately infected with smallpox in this way was because the mortality rate of 20 – 30 % dropped to 0.5 – 2 %.6 These odds were preferred. Variolation was also practiced in Asia and Africa before spreading into Europe and the Americas. In fact, in Boston it was a slave by the name of Onesimus who told his master Cotton Mather he had been protected against smallpox in Africa and that it was often used among the Guramantese.7  This started Cotton Mather on his journey to introduce the practice into north America.

It was in the great city of Constantinople, in Turkey, where East meets West, that this practice was noticed, confirmed and subsequently spread through Europe. Lady Mary Wortley, who had lost a brother to smallpox and suffered terrible facial scaring from it herself was the first to introduce it to England in 1721.8 It was soon adopted throughout the country and Edward Jenner was inoculated with smallpox when he was 8 years old.9

Variolation was not without its risks because for every 100 inoculated, 2 or 3 would die from the disease and anyone naturally contracting smallpox from those inoculated would be at a more severe risk of death. One of America’s greatest intellectuals, a preacher, theologian and missionary called Jonathan Edwards (grandfather of the 3rd vice president of the United States) strongly supported smallpox inoculations and despite the risk, was himself inoculated in 1758. His health was not strong enough and he succumbed to the smallpox disease and died.10 The inoculation was far from ideal.

A cow named Blossom and a breakthrough

When inoculating a person Edward would typically scratch the surface of their skin and rub in powdered scab or fluid from the pustules of a smallpox patient. However, he curiously noted that some people were resistant to his attempts to give them smallpox, despite never having had the disease before. He was not alone in this observation as there are records of a number of other men studying this interesting phenomena. Those who were resistant were from the countryside and a higher percentage of them happened to be milkmaids (young girls who milked cows). He suspected this was due to a disease of the cow known as cowpox, as others before him had also thought. When infected, the milkmaids typically reported sores on their hands and feeling under the weather for a week before returning to normal.

Oil panting of James Phipps being inoculated with cowpox. by Edward Jenner. Painting by Ernest Board. Credits: Wellcome Library London.

One day a milkmaid named Sarah Nelmes came to Edward concerned that she had smallpox but he correctly diagnosed it as simply cowpox from her master’s cow named Blossom. She had become infected after scratching her wrist with a thorn and the open wound coming into contact with the blisters on the cow. Edward seized this opportunity to collect some pus from her sores and inoculated a young boy named James Phipps, the son of his gardener, with it on the 14th May 1796.

As expected James developed cowpox a week later and after he had recovered Edward waited a month before inoculating him with smallpox on the 1st July.  James did not get smallpox. Edward then waited a further several months before trying again to inoculate James with smallpox, but to no effect. James was immune.11

Edward’s reaction is best left to his own words taken from a letter at this time:

But now listen to the most delightful part of my story. The boy has since been inoculated for the small pox which, as I ventured to predict, produced no effect. I shall now pursue my experiments with redoubled ardour.

Believe me yours, very sincerely,

Convincing the world and spreading the vaccine

Edward Jenner presented his findings over the next number of years, resulting in the gradual acceptance of what he had discovered despite strong initial skepticism and resistance. On the 6th May, 1801 he published his famous ‘On the origin of the vaccine inoculation‘ summarising his work and findings. He continued to work and promote the vaccine, so named because vacca in latin means ‘cow’ and vaccinus means ‘from cows’.13 14 This promotion was successful as can be seen from the example of Puerto Rico in the Caribbean where residents were vaccinated against smallpox in November 1803 by obtaining their own vaccine after hearing of his work. This was much to the disappointment of the Royal Balmis expedition that later arrived from Spain with the vaccine in February 1804 thinking they would be the first. How was the vaccine kept usable despite the long voyage? Orphans. 22 orphans to be exact. The cow pox disease was passed from one orphan to the next throughout the length of the journey. This ensured that at the end of the voyage an orphan would be sick and fresh pus could be extracted from his sores to use. However, despite there being no need for their vaccine they protested that it was the only true vaccine, swallowed their pride and moved on to successfully vaccinate in other places in the Americas and Asia.15

Edward Jenner’s vision of a world without smallpox 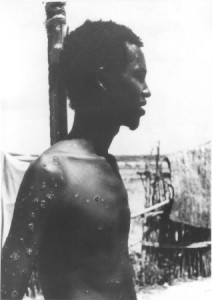 Ali Maow Maalin (1954–2013), the last person to be naturally infected with smallpox in October 1977 in Somalia. Courtesy of: CDC/J. Wickett and The World Health Organization

Edward outlined his vision of the vaccination he was promoting in the following statement:

The numbers who have partaken of its benefits throughout Europe and other parts of the globe are incalculable: and it now becomes too manifest to admit of controversy, that the annihilation of the Small Pox, the most dreadful scourge of the human species, must be the final result of this practice.16

Edward Jenner saw a future without smallpox just as many today see a future without measles. In 1967 the World Wide Health Organization pushed ahead with Edward’s vision to eradicate smallpox by vaccinating as many people as it could against smallpox and hunting down outbreaks. Finally in October 1977 the last person with smallpox was found in Somalia and everyone around him vaccinated. The virus, unable to replicate outside of its human host, had no-one else to infect and finally ceased to exist in humans. Apart from one lab incident in 1978 there hasn’t been a human infected with smallpox since.17 It has been eradicated as a disease and vaccinations subsequently stopped as they were no longer needed. Mankind’s war of Independence from smallpox had finally been won and Edward Jenner’s vision realised.

We can do the same with measles because it, like smallpox, is unable to replicate outside its human host and we have an effective vaccine. I look forward to a day when measles vaccinations are no longer needed, just like we now no longer need smallpox vaccinations. For this to happen we need measles vaccination coverage to remain high. From 2000 to 2013 vaccinations caused a 75 % reduction in worldwide measles deaths saving an estimated 15.6 million people. However, 145,700 people were still killed in 2013, the majority of which were children.18 There is some way to go. Let’s work to ensure future generations have a measles free world as generations before us worked to ensure we have a smallpox free one! 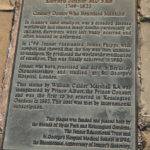 The plaque commemorating Edward Jenner can be found in Hyde Park, London. Click to read.

As to what became of the cow, Blossom. Well, I’d like to think she had a happy ending as she was probably obtained by Edward Jenner. Her hide was donated by the Jenner family in 1857 to St George University of London, so the next time you are in that area why not go and see her in St George’s medical school library! If you take a walk through the famous Hyde Park make sure you visit the Italian Gardens where you will see a statue of Edward Jenner and a memorial plaque commemorating and honoring him. I stood for a while amongst the bustle of people and remembered what he did for us all. All should know his name. 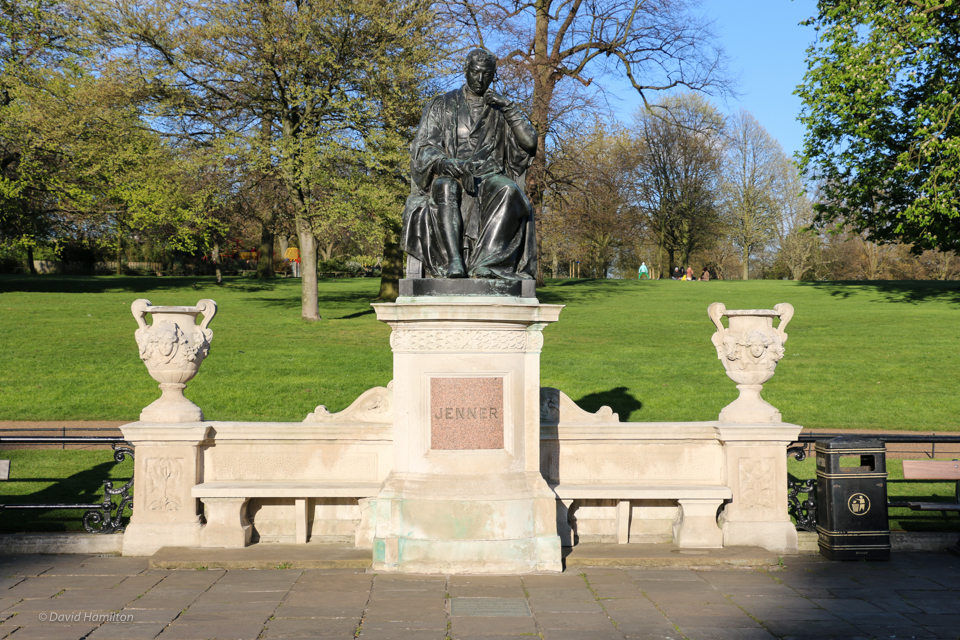 The statue of Edward Jenner in honor of his acheivement for mankind can be found in Hyde Park, in the Italian Gardens.

Vaccinations and the past that we forgot

A short post on our forgotten past before vaccinations and what we have forgotten to teach our children.