Elmo from Sesame Street has some concerns about vaccination which he talks over with US Surgeon General Vivek Murthy. Unfortunately there is a lot of mis-information regarding vaccinations on the internet and this is causing fear and confusion among parents of new-born babies. The U.S. Surgeon General, Dr Murthy is a source that you can trust and here he has a chat with Elmo who is a little nervous about getting his shot.

Check out the video below, learn more about the Surgeon General and connect with them on social media:

I’m sure Elmo needs no introduction but perhaps fewer people have an idea of who the Surgeon General is and what he does. So here’s a quick summary.

Vice Admiral (VADM) Vivek H. Murthy, M.D., M.B.A., was appointed by President Obama in December 2014 to the position of Surgeon General. This position carries with it the responsibility of promoting and ensuring health across the United States and its territories. He also oversees 6,700 highly qualified health professionals that work to promote health with the aim of making the U.S. a healthier place to live.

What are his qualifications?

Dr. Murthy’s father was an immigrant from India and a doctorwho had a medical clinic in Florida, Miami. Dr. Murthy received his Bachelor’s degree from Havard and his subsequent M.D. and M.B.A from Yale. After his training he worked in Havard Medical School both as a doctor and instructor.

What additional experience does he have? 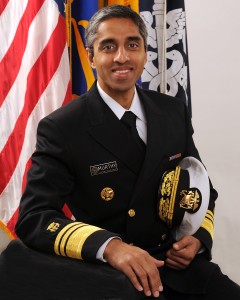 He has 20 years experience improving health in communities and countries around the world. He has also co-founded the following programs:

He also has experience in medical research on vaccine development and his findings have been published in:

He is also a healthcare entrepreneur, chairing a successful software company:

He has also worked in a non-profit organization:

Why is he teaming up with Elmo?

As the Surgeon General his aim is to promote health across the U.S and its territories using the best available scientific information. Elmo is a public figure that is well known from Sesame Street and it’s a fun, playful way to get the message of the benefits of vaccinations across to the public.

How do Vaccines make us Immune?

A post on how vaccines give our bodies immunity using the example of the first vaccine against smallpox. This disease has now been eradicated and the vaccine stopped.