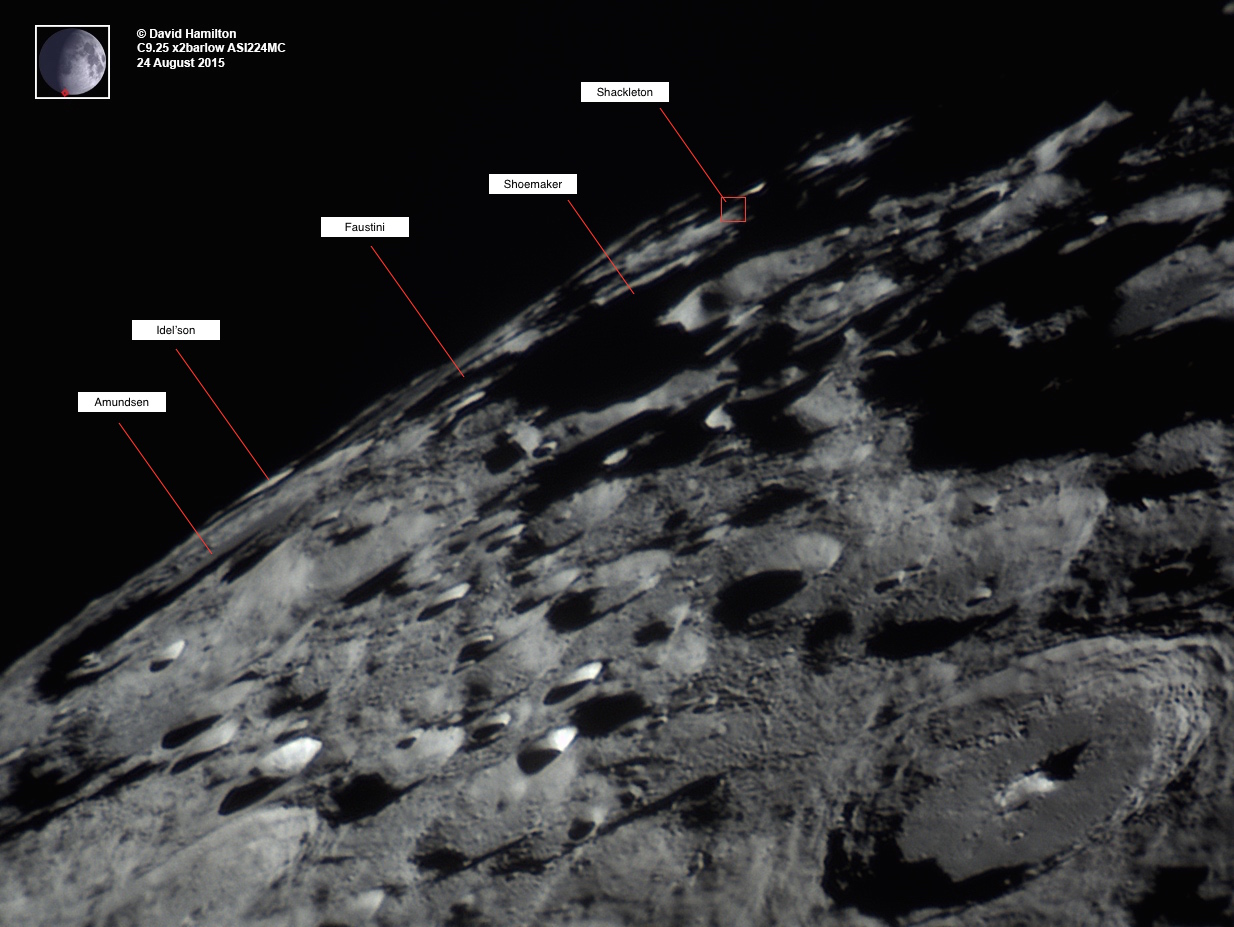 The south pole of the moon is marked on the Shackleton crater, a potential spot for a lunar base.

The idea of a lunar base has been around for a long time, in fact, as part of George Bush’s plan Vision for Space Exploration (VSE), the USA was to have a lunar outpost by the year 2024. 1 This isn’t happening but not everyone is sad about it, with Buzz Aldrin stating;

the lunar surface… is a poor location for homesteading. The moon is a lifeless, barren world, its stark desolation matched by its hostility to all living things. And replaying the glory days of Apollo will not advance the cause of American space leadership or inspire the support and enthusiasm of the public and the next generation of space explorers. 2

As the second man to walk on the moon, he’s been there and done that so you could say a plan for a lunar base wouldn’t wow him. I understand this, because if we’re talking about space exploration…well, it’s maybe not going to be as inspirational as say putting a man on Mars for the first time. Certainly there still remains science to be done on the moon and there are viable arguments that we first need ‘proof of concept’ with a lunar base before building one on Mars.

In NASA and the USA it seems though that the scales are tipping more towards the inspirational side of things – being able to say you were the first to step on Mars. So growing support seems to shifting towards a manned mission to Mars with the aim of eventually establishing a manned base there. This would technically make the human race an interplanetary species, which if you ask me, is pretty cool. However, not everyone has their eyes set on Mars and there are those within NASA that want to see a lunar base established.

Building a lunar base

It should be said that the moon does indeed remain highly attractive but less so in regard to space exploration, rather its attractiveness lies in rare metals and other elements. Essentially, the commercialization of the moon. Any attempt to mine on the moon would require a moon base that could be expanded into a mining complex and this is a difficult hurdle to overcome. However, with the discovery of water on the moon and the success of SpaceX’s reusable rockets the cost of setting up a moon base has dropped to what some believe to be achievable levels. NASA’s Alexandra Hall and NextGen Space’s Charles Miller concluded the following;

“The US could lead a return of humans to the surface of the Moon within a period of 5-7 years from authority to proceed at an estimated total cost of about $10 billion (±30 percent),” 3

To put this into material terms, the USS Gerald R. Ford aircraft carrier that was launched this year cost $13 billion.4 So it is well within reach. However, enough about the cost – watch this short video to see how they could go about building the lunar base.

Will there be a lunar base soon?

I think it’s inevitable. It’s really only a matter of time but how long remains to be seen. Certainly there will be a lunar base by the end of this century and as the quote from the paper above shows, it could take less than a decade to do it.

This last month (June 2016) a private company known as Moon Express asked permission from U.S. government agencies to land a spacecraft on the moon in 2017 . This resulted in a lot of scratching heads as to who had authority to grant permission. As  Moon Express Chief Executive Bob Richards said “No commercial company has ever asked to go outside of Earth orbit and go elsewhere before. We’re a pathfinder out of necessity,” This commercial company isn’t alone; Luxembourg has set aside €200 million to tempt space firms to relocate after partnering with 2 companies interested in mining asteroids.5 What is sure is that any attempt to mine on the moon will require the building of a base and the interest to do this is definitely there.

The interest isn’t there simply for private companies but also for the space organizations of other countries such as Russia, Europe, India, Japan and China. This month (June 2016) the press secretary of the TsNIIMash aeronautics research institute within Roscosmos (the Russian equivalent of NASA) stated that Russia is reviving plans to build a moon base. 6 China hasn’t stated that it plans to build a moon base, however, it has a robotic expedition (Chang’e 4) planned late 2018 to explore the farside of the moon. This will build on its most recent lunar lander expedition which was the Chang’e 3.7

Where would a lunar base be built?

Regardless of when it happens, the south and north poles of the moon are the current targets for a lunar base. This is due to these areas being in the sunlight the most which is critical for solar powering of the base. There are also areas there that are in completely darkness all the time where presence of frozen water has been detected which could easily be harvested.  In the video above, the Shackleton crater is mentioned as a possible location for the base. This is at the south pole of the moon and it is an area that can be easily seen through a telescope. The image at the start is one I took of the south pole showing Shackleton crater where there may potentially be a moon base one day. So next time you are out with a telescope or binoculars see if you can spot this area and remember, you might just be looking at mankind’s next home away from home.