A Caribbean Moonrise from Puerto Rico

Sometimes you just happen to be in the right place at the right time and other times careful planning pays off. In my case it was just a matter of luck that I happened to head outside with my camera and spotted the moon rising over the ocean. I hadn’t captured a moonrise in this setting before so I set up my Canon 70D on the tripod and began taking a series of photos.

The clouds were favourable, with some very high altitude ones being lit up from underneath, the foreground ones causing some moonbeams and in the distance, heavy rain clouds. So I tried various ISO settings and exposure lengths to get an idea of what sort of detail I could bring out without the moon blurring (due to the moon’s movement). In the end I settled with ISO640, 6sec exposure, 135mm at f/5.6 and then shot a second image with same settings except at 1/50 sec. This second image correctly exposed the moon as in the previous image it was always going to be completely overexposed. Later in photoshop I would use this image to give some detail to the moon in the first image.

So with a few images captured, I headed inside with the intention of processing them the next day… however, a massive powercut across the island of Puerto Rico would throw a spanner in the works and we had to wait a few days before it was restored. So when I finally got round to processing the photo, I decided to discard the colour information and tweak the contrast among a few other things. This gives a grainy effect which to me gave it an older feeling as well as highlighting the moonlight on the water which I liked .

So this is the moonrise as seen from Isabela in Puerto Rico on the 20th September at 10.19pm. 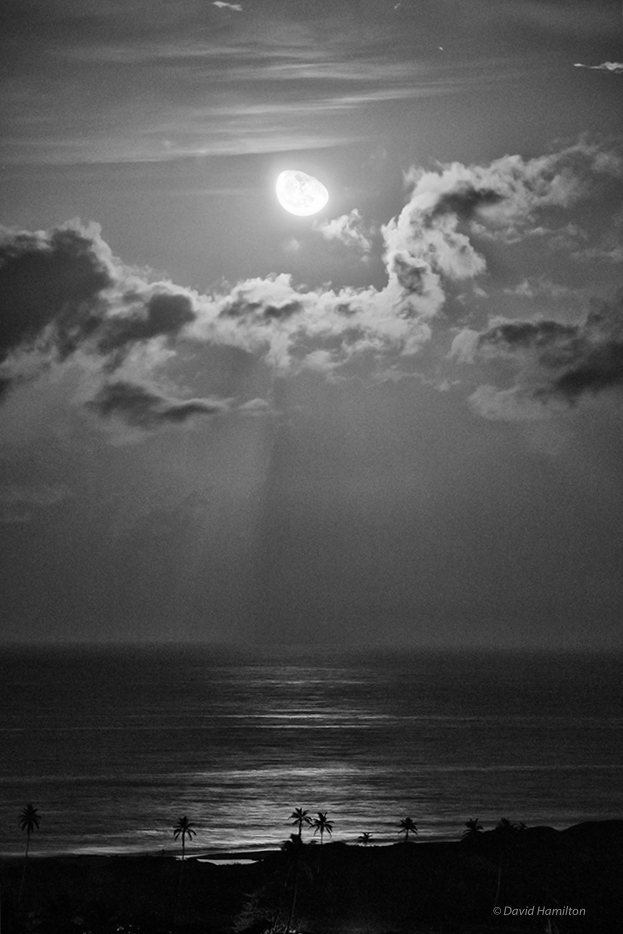 Moonrise as seen from the town of Isabela in Puerto Rico.