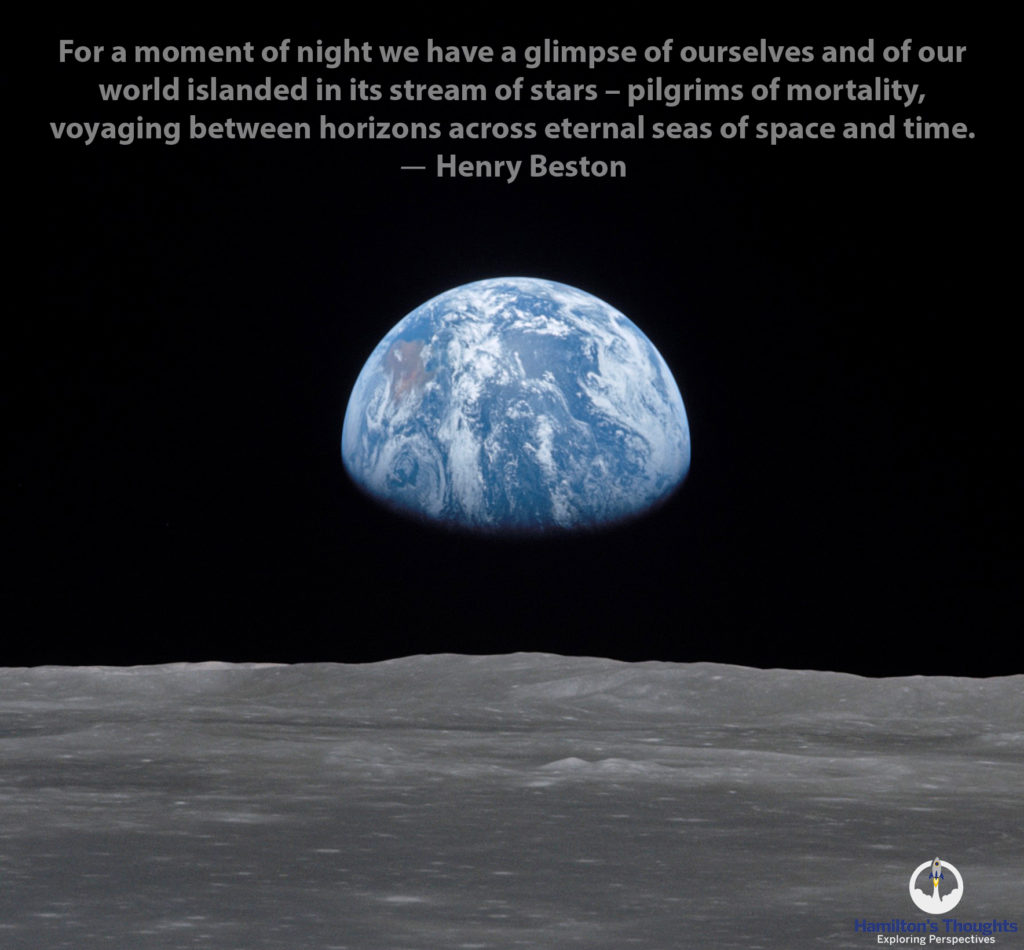 View of Moon limb with Earth on the horizon, Mare Smythii Region. Earth rise. This image was taken before separation of the LM and the Command Module during Apollo 11 Mission. Credit: NASA

I’ve been thinking a while on some of my favorite quotes on space. It’s fair to say that the night sky is a gateway to the imagination that poets, writers and many others have explored over the millennia. For me, it is the sheer scale of things that hits me – space is always bigger than I can imagine.

Astronomy compels the soul to look upward, and leads us from this world to another. - Plato Click To Tweet

Space gives me perspective and reminds me that I’m part of a bigger picture, that life is rare and should be valued, that I am small and my life fleeting. Space is the unknown, the adventure and the possibilities limited only by my imagination.

Hearing the gasp the first time someone looks through a telescope and sees a planet or the moon is the rising sense of wonder and the spark of comprehension as the size of their perceived universe expands. Anyone who has a telescope will be familiar with this response and it’s a joy to behold.

I once had an 80 year old lady look through my telescope at the moon, then immediately straighten up and ask me,

“Is this image I’m seeing a live image?”

After laughing and explaining that, yes, this was indeed live, she said,

“I always saw the moon up in the sky but I never knew it looked like that.”

Then she was back at the telescope, using the hand controller herself to explore different parts of the moon. No matter your age, the sense of wonder is there, as is the desire for exploration.

For a moment of night we have a glimpse of ourselves and of our world islanded in its stream of stars – pilgrims of mortality, voyaging between horizons across eternal seas of space and time. Fugitive though the instant be, the spirit of man is, during it, ennobled by a genuine moment of emotional dignity, and poetry makes its own both the human spirit and experience. 1

“You develop an instant global consciousness, a people orientation, an intense dissatisfaction with the state of the world, and a compulsion to do something about it. From out there on the moon, international politics look so petty. You want to grab a politician by the scruff of the neck and drag him a quarter of a million miles out and say, ‘Look at that, you son of a bitch.” 2

“It [the rocket] will free man from his remaining chains, the chains of gravity which still tie him to this planet. It will open to him the gates of heaven.” 3

“The greatest gain from space travel consists in the extension of our knowledge. In a hundred years this newly won knowledge will pay huge and unexpected dividends.” 4

“The heavens declare the glory of God, and the sky above proclaims his handiwork. Day to day pours out speech, and night to night reveals knowledge. There is no speech, nor are there words, whose voice is not heard. Their voice goes out through all the earth, and their words to the end of the world.” 5

“Mystery creates wonder and wonder is the basis of man’s desire to understand.”

“”Perhaps it won’t matter, in the end, which country is the sower of the seed of exploration. The importance will be in the growth of the new plant of progress and in the fruits it will bear. These fruits will be a new breed of the human species, a human with new views, new vigor, new resiliency, and a new view of the human purpose. The plant: the tree of human destiny.” 6

— Neil Armstrong (First man to walk on the moon)

What about you? Have you quotes that inspired you or stories of your first experiences looking through a telescope?