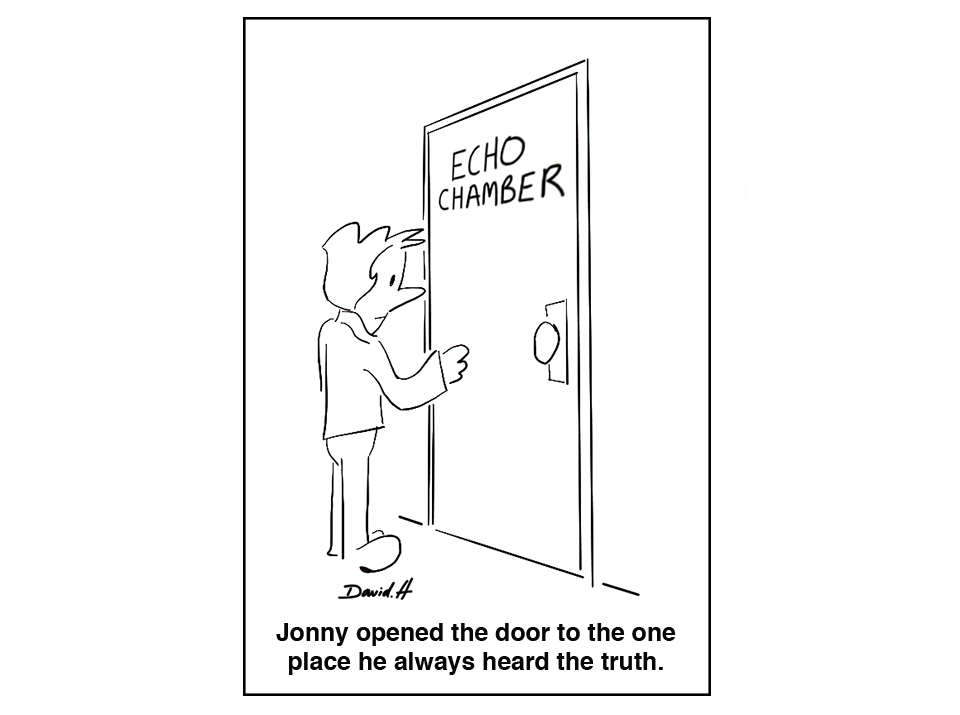 Test ideas by experiments and observations. Build on those ideas that pass the test. Reject the ones that fail. Follow the evidence wherever it leads, and question everything. Accept these terms, and the cosmos is yours.

So what exactly is the echo chamber? Well, the echo chamber is formed whenever I actively seek information that supports what I already believe in absence of information that contradicts what I believe. It’s like Jonny going into the room in the image above, listening to the echoes of what he’s saying and walking out convinced. It’s a comfortable, positive reaffirmation of myself and my beliefs. It is my echo.

My bias leads me to want to support what I believe, therefore, I search for support rather than something that will undermine me. This is a trap to avoid. We all have our biases, meaning we all lean towards certain types of information that we care about and it is this that opens us up to the trap of the echo chamber which can cripple our personal development if we are not careful. A judge that hears only one side of the story negates their duty to judge between two sides. Judges like that are corrupted and uninterested in the truth. If I am interested in truth then I too need to hear both sides while setting my bias aside. 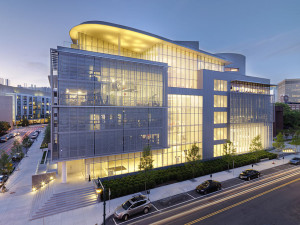 Nicholas Negroponte the M.I.T. Media Lab founder used the term ‘The Daily Me‘ in 1995 to describe a virtual newspaper that shows you articles that it thinks you will like based on what you have previously read.1 The Daily Me is the term he used for this positive reaffirmation of yourself and it worried him. He foresaw the possibility of a feedback loop that would eventually permanently alter what information someone was shown. The echo chamber.

To set the scene of the echo chamber it’s important to realise that it’s always been around but it’s now much easier to create. We’re living in an age where, thanks to the internet, information is free flowing. A staggering 3.2 billion people are now online, that’s 43.2 % of the world population.2 There’s 24 hour news, online encyclopedias, online movies, documentaries, opinion blogs and social networks that connect me with anyone I want. It’s an information torrent that I get to dip into and sample whatever, however and whenever I want. Each one of us have now been given the responsibility of being our own gatekeeper to this information and that can be a problem.

In days gone past it would be newspaper or news station editors that screened information based on a set of standards (truthfulness being one of them) and rejecting information deemed unworthy. We had our limited choice of sources of information and had to trust those investigative journalists to do a good job. Now this job of screening information has fallen to each and everyone of us, you are the gatekeeper.

Your enemy and the creator of the echo chamber is your bias. I can dip into the information flow and select whatever opinion I agree with and reject any that I don’t. In fact, I can continually dip into the information flow and surround my beliefs with intelligent arguments bolstering my position. I am the gatekeeper. I can satisfy the itch of my ears with whatever my heart desires in the information flow. Therein lies the danger of the echo chamber and for the sake of my own personal development and yes, even well-being, it’s something I have to always be aware of.

A current example of the Echo Chamber in action

A current extreme example of this is the radicalisation of youth by the terrorist organisation ISIS. Imagine an internet system where someone reads an article promoting extremist activity and is shown other related articles to choose from when they are finished. The more they continue reading, the more they get shown the related extremist material. Or they follow an extremist online in social networks, the system then shows them related people to follow who have similar views – extremist ones. Imagine a system where search engines then begin tailoring search results to the articles they read, showing the extremist ones towards the top and filtering away any anti-extremist ones because they are never clicked on. Most will be aware of the real life examples of youth running off to Syria having been radicalised. This is the echo chamber in action and in this case, the choices made are life threatening.

This internet system exists and you are in it. If you aren’t careful, you’ll find yourself in echo chambers without meaning to be in them simply because the system is trying to give you the results it thinks you want.

This positive feedback system that leads to echo chambers without you really knowing it, is also known as a Filter Bubble. The TedTalk below was given by Eli Pariser in 2011 where he argues that search engines tailoring results specifically for individuals (us) has a dangerous unintended side effect. He exposes how by the system filtering results that it thinks we don’t want, we become trapped in a bubble that prevents us from expanding our worldview. This he argues will prove bad for us and bad for democracy.

How to protect yourself from the Echo Chamber

To protect yourself from the Echo Chamber you have to (like the judge) be hearing from both sides (or more) because only then can you be sure you aren’t simply listening to echoes of your bias. Nicholas Kristof, New York Times columnist and two-time Pulitzer Prize winner said that to avoid it he reads the Wall Street Journal editorial page every morning. It contains opinions he often disagrees with. “Yes it’s often painful…  but I’d like to think that it it builds character and makes a better me.”3 This is good advice especially in election year in the USA – never isolate where you get your information from or you will create an echo chamber.

From my own experience I would advise the following:

Do this and you’ll be well on your way to avoiding the echo chamber. If you’ve any other advice that you’ve found useful please share below.