Vaccinations and the Past that we Forgot 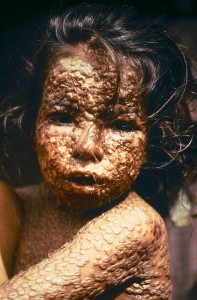 The now eradicated smallpox that had a mortality rate of 20-30%. Photographer: James Hicks

Smallpox with a mortality rate of 20 – 30% is what the girl in the photograph above has.1 It’s a shocking image of a terrible disease that few now alive have ever seen in existence (I’d love to read your comments if you have) and certainly no human has been infected with it since 1978 but things didn’t used to be this way. Only 50 – 100 years ago it was very different and it’s something we’ve forgotten and our children have not learned. Let’s go back 100 years to the great war.

The year is 1915 and we’re in the middle of the first world war, the numbers of dead from battle will rise to around 17 million by the war’s end in 1918.2 Many still commemorate this war to this day and we often quote or hear the reading of the following:

They went with songs to the battle, they were young.
Straight of limb, true of eye, steady and aglow.
They were staunch to the end against odds uncounted,
They fell with their faces to the foe.

They shall grow not old, as we that are left grow old:
Age shall not weary them, nor the years condemn.
At the going down of the sun and in the morning,
We will remember them.

They mingle not with their laughing comrades again;
They sit no more at familiar tables of home;
They have no lot in our labour of the day-time;
They sleep beyond England’s foam.

We also commemorate it to this day recognising the horror of war and the price so many paid for our freedom.

But returning to 1918 you’ll find something we don’t commemorate. It’s no longer “lest we forget” it is “we have forgotten.” You see from 1918 to 1920 virtually as many people lost their lives as in both world wars put together. Their deaths were caused not by bullets, bombs or shells but by a very small, a very terrible thing. The influenza virus. It claimed the lives of over 50 million people across the world although the real numbers may be as high as 100 million deaths.5 6

Imagine the deaths of all in the world wars and now see them all as children and babies. That is Measles. Do we forget that the natives of the Americas had 90% of their population wiped out by these illnesses brought from Europe? So many deaths dwarfing the ones that we have inflicted on ourselves from our own wars and yet in our freedom we have forgotten and begun to reject the very thing that gave us this freedom.

Lest we forget… no we have truly forgotten and we need to begin to remember again.

A post on Edward Jenner who is said to have saved more lives than any other human by discovering the vaccine that led to the eradication of smallpox. This is what we need to remember and teach our children.