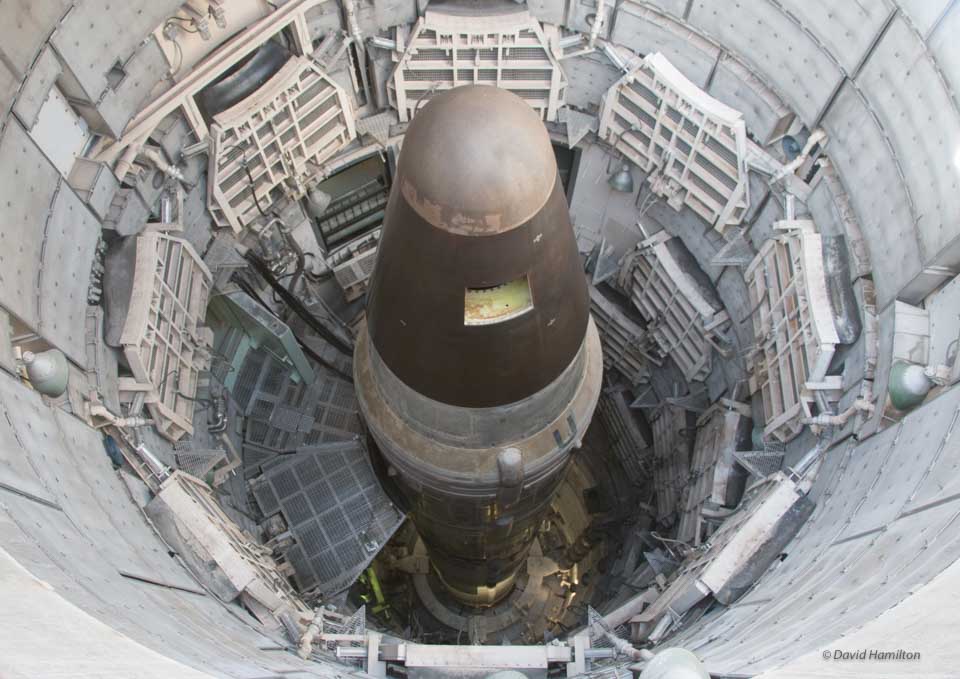 The Titan II missile sitting in its silo

Using the threat of such overwhelming violence if attacked to deter any nuclear attack.

The end of the second world war had ushered in a new era, the nuclear era and with it the nuclear arms race. The world had just witnessed the devastating Little Boy and Fat Man, two terrifying nuclear bombs, dropped on the cities of Hiroshima and Nagasaki that resulted in Japan’s surrender and the end of World War 2. The exact number of fatalities is hard to determine. One thing is certain, the world was never the same. Now, some 70 years later there remains a single Titan II nuclear missile silo that is open to the public to visit. It’s a fascinating look into a remanent of the cold war, the nuclear arms race and the space race. This is some history behind it and my trip there showing photos throughout the silo and video of the launch demonstration.

The world awakens to a nuclear era 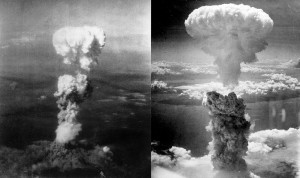 The image on the left shows the atomic bomb blast at Hiroshima while the one on the right shows the blast at Nagasaki.

In Hiroshima, at 8.15 am on the 6th August, 1945, a 15 kiloton atomic bomb 1 detonated 600 meters above the city causing tens of thousands to instantly lose their lives. The death toll rose to 140,000 by the end of 1945. 2 Three days later on the 9th of August, the city of Kokura was completely overcast with cloud and a US B-29 Superfortress changed course towards its secondary target of Nagasaki. At 11.02 am a single bomb floated down through the sky on a parachute towards the city below and detonated. Once again tens of thousands were instantly killed and the death toll rose to around 74,000 by the end of 1945. 3

Tsutomu Yamaguchi remains the only person officially recognised by the Japanese government as having survived both nuclear bomb blasts. In Nagasaki, his boss was questioning his sanity on hearing the story of a single bomb destroying Hiroshima when the second atomic bomb struck. He is perhaps the one person I would say was the most unlucky and yet most lucky at the same time. His account can be read here.

Nazi Germany and the race for rocket technology

The nuclear arms race began as nations rushed to develop these devastating weapons because none felt safe without them or at least without the threat of being able to use them. At the same time the race to further develop rocket technology began.

A German V2 rocket launching in 1943. In total Germany launched over 3000 of these at the allies.

German rocket technology was highly prized and Wernher von Braun and his team (who had also been working on a missile to hit the USA before World War 2 ended) was brought across to the USA after the war to continue development. Wernher von Braun was so highly valued that in 2001 NASA stated, “Wernher von Braun is, without doubt, the greatest rocket scientist in history“.4 Along with Wernher, the USA also brought back V2 rockets and parts to White Sands Proving Grounds, New Mexico. There they continued working. Russia too acquired German V2 rockets at the end of the war and after learning their technology also developed its own rocket program.

Why was this rocket technology so highly valued? Simply because a nuclear bomb could be placed at the top of the rocket and delivered quickly to practically any destination in the world. Anyone that possessed this had the best nuclear weapon delivery service, a powerful military advantage. A more detailed description of the development of rocket technology (which incidentally was also critical in the space race) can be found here. 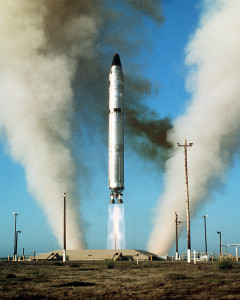 Enter the Titan missiles. The USA introduced the intercontinental ballistic Titan Missile in 1955 and then rapidly upgraded it to the Titan II Missile in 1960 which could deliver a larger atomic bomb, fly further and was more accurate. This missile had a range of 6200 miles (10,000km) which pretty much brought anywhere in the world into attack range in the space of only 25 to 30 minutes. It carried a 9 megaton thermonuclear warhead known as W-53, which, to put it into perspective, had a power around 600 times that of the Hiroshima atomic bomb. The heat generated from an explosion of this size would cause severe third degree burns to any unprotected person 20 miles (32km) away not to mention the devastation at ground zero where temperatures could be hotter than the surface of the sun. This was the largest U.S. land based nuclear missile ever in operation. 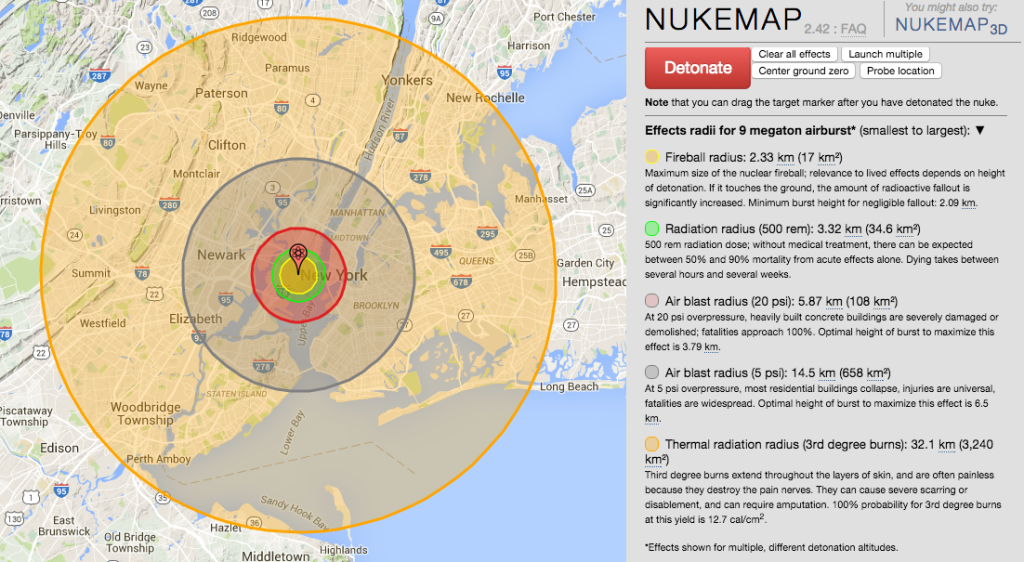 The effect of a the U.S.A’s most powerful nuclear missile. The 9 megaton nuclear explosion (600 times more powerful than the Hiroshima atomic blast) is put into perspective over New York.

However, having a missile was all well and good, but what if Russia launched a surprise nuclear strike, would the USA be able to retaliate in time before the Russian missiles hit? That was the question that was posed by the US military and the Titan II missile silo was the answer.

A visit to Sahuarita, Arizona allowed me to stop in and visit this bit of cold war history. In September 1981, when the Reagan administration decided to deactivated the Titan II missiles, 53 silos were destroyed in accordance with the SALT treaty. The destroyed silos where left that way for months in order that Soviet satellites could verify the destruction. Only one, known as complex 571-7, escaped this fate to become the Titan II missile museum. 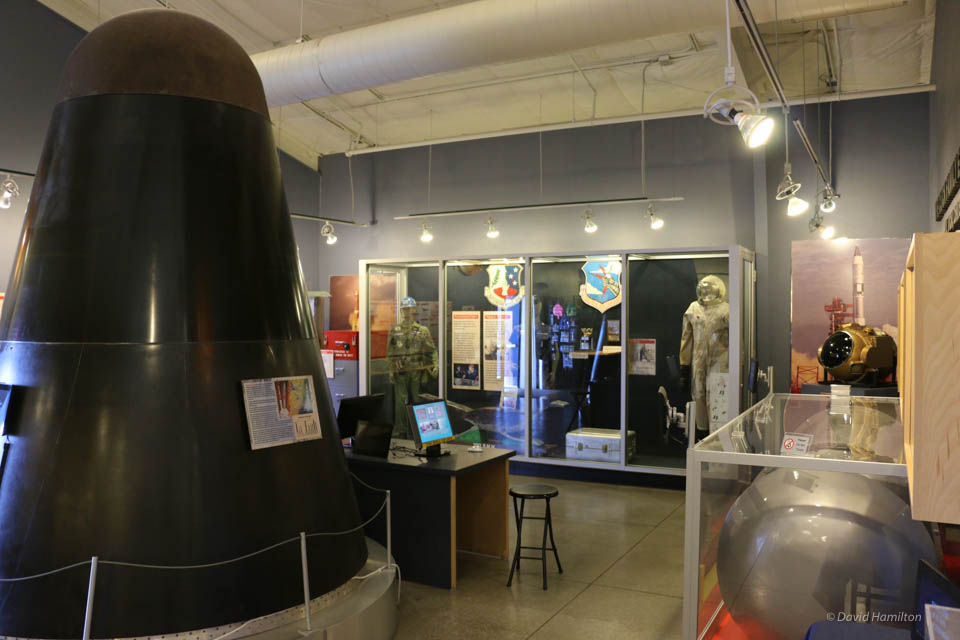 The Titan II missile museum main room. The re-entry vehicle (left) contained the nuclear bomb (right) and was what hurtled down to the target in the final stage. 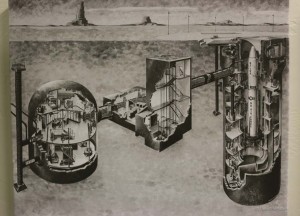 A representation of the underground Titan II missile silo.

The silo itself is underground as can be seen from the representation on the right and consists of three main sections, the silo housing the missile (right), the entrance section (middle) and the control center where the silo crew were based (left). It was built to physically withstand a nuclear blast (if over a mile away), and protect the equipment and Titan missile from the resulting heat, electromagnetic radiation and shockwave. For two decades it was manned 24 hours, 7 days a week with the crew ready to launch at a moments notice. Designed to be able to launch within 58 seconds from the turn of a key, this was the US military’s answer to ensure retaliation in the event of a surprise attack.

The Titan II missile silo in Arizona under construction.

The silo was protected using surface security teams, a doppler radar system that detected any movement around the missile silo door and warning signs such as the one below. 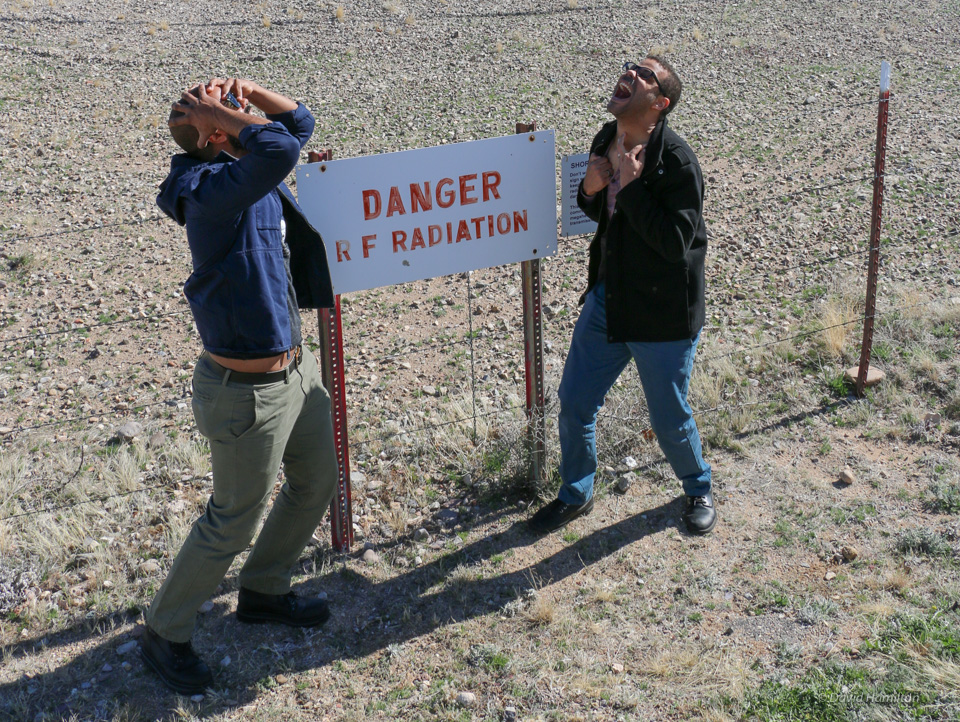 Two of my good friends suffering the effects of RF radiation on the outskirts of the silo! In reality Radio Frequency (RF) radiation is harmless and this sign was just placed to scare people away. 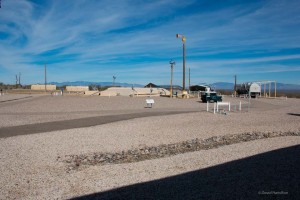 A look towards the concrete opening beneath which lies the Titan II missile. It weighs about 750 tons and could be opened in 20 seconds. 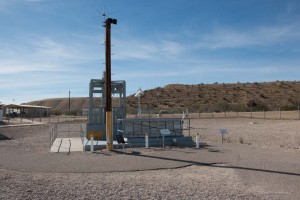 The surface entrance to the Titan II Missile Silo. It includes a lift for those who need wheelchair access or who find walking down steps difficult.

Descending down the steps into the Titan II Missle Silo leads to two massive doors (an outer and inner one), the outer one could only be opened from the control room and was monitored by the only security camera in the facility. 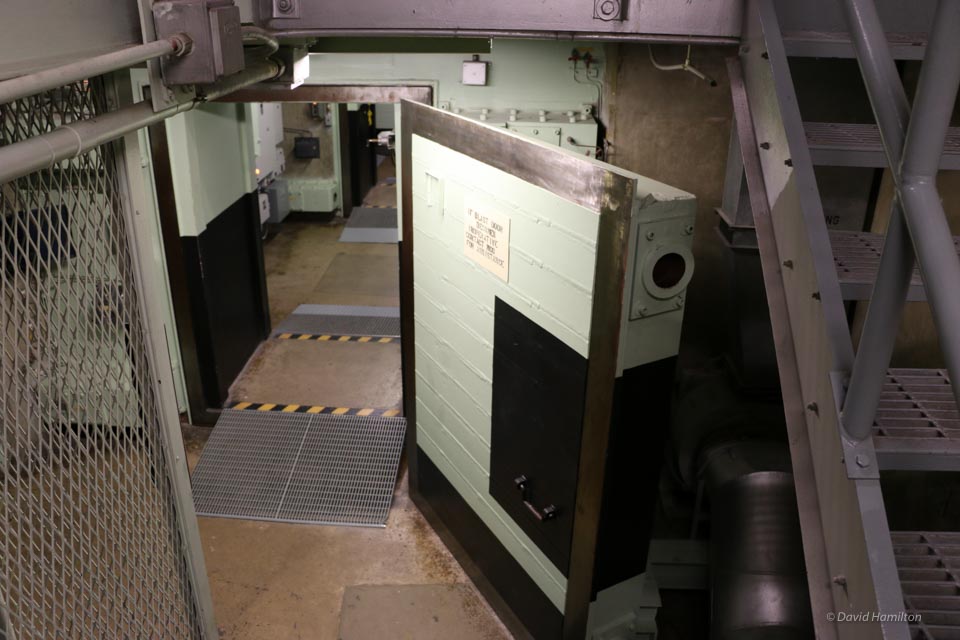 The massive door at the bottom of the entrance section. This door was monitored by a security camera and could only be opened from the main control room.

Once inside we head to the control room that had a two man policy meaning no-one could ever be there alone. The crew commander was the only man armed in the facility and he had authorization to use deadly force should a crew member fail to carry out instructions. 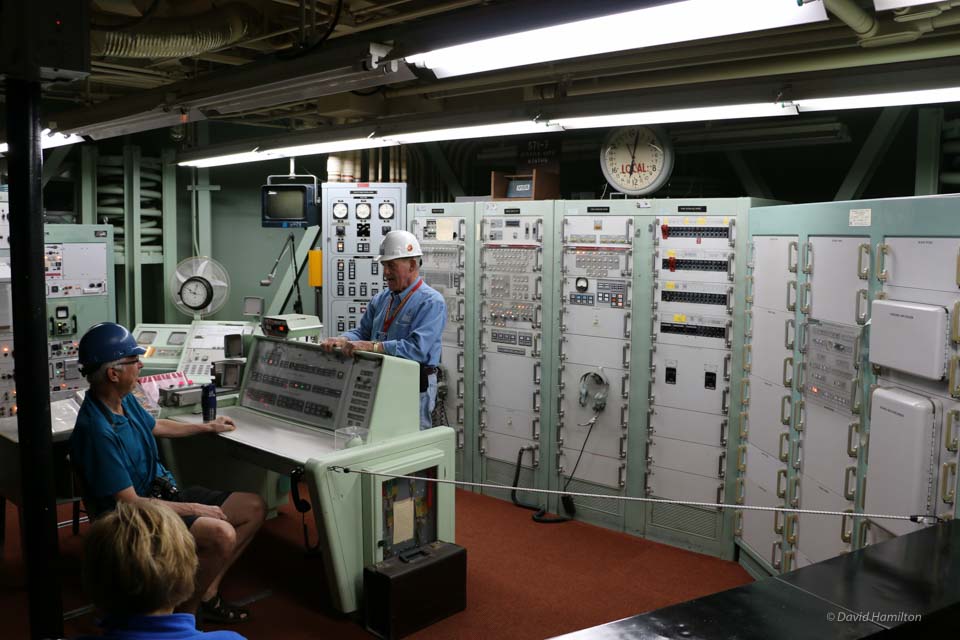 The Titan II missile silo control room. Everything from target selection to the system checks took place here. Notice the huge spring in the back left – the whole room was suspended on these to dampen the shockwave from a nuclear blast and protect the critical equipment.

The control room panel had 3 target buttons. No-one on site knew what these actual targets were as these were not programed from the silo. To this day they remain classified and potentially are still targets. For demonstration purposes target 2 is selected and has been set to a ground burst which would have been selected for an underground target. 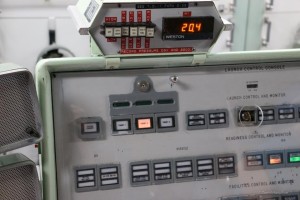 At the main control panel receiving an important call.

If the call ever came through to launch it would take between 3 and a half and 5 minutes before the missile would launch. A series of critical authorization checks had to be carried out, verified and then rechecked by another person. Once satisfied the order was valid, the target would be selected, ground or air burst selected and then two keys turned by different people at the same time. Once the keys had been turned it was the point of no return and 58 seconds later the missile launched. 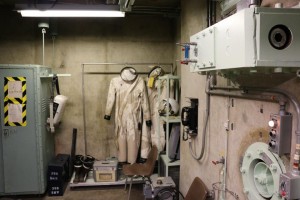 Titan II missile silo suits that were used to protect the crew working around the missile. 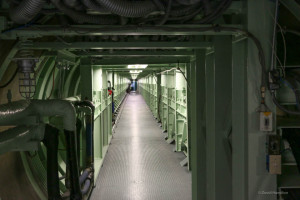 The corridor between the control center and the Titan II missile. A series of large blast doors separate the two. 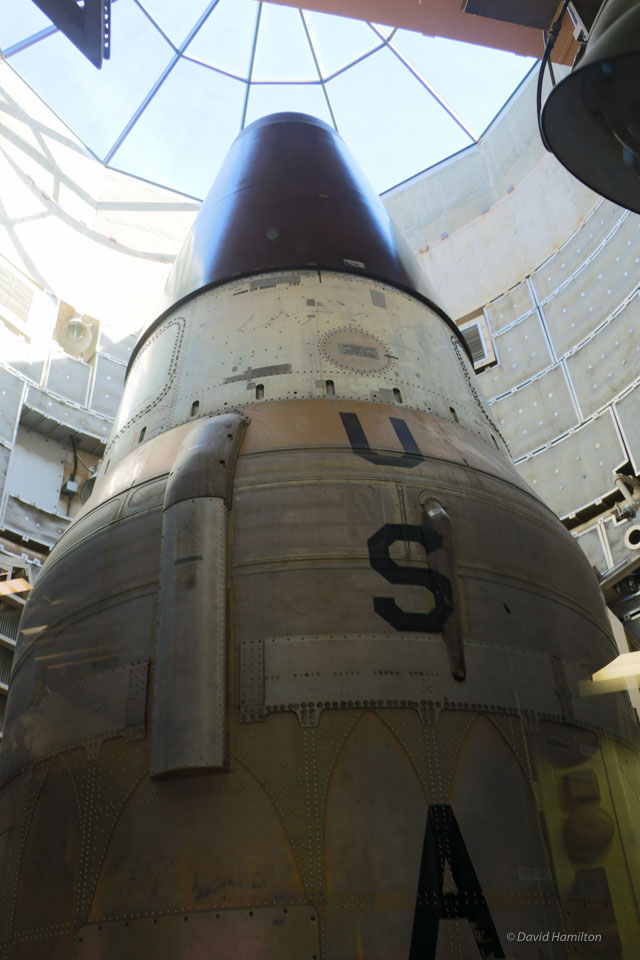 A close up of the top of the Titan II Missile in its silo.

If you ever get the chance to visit the Titan II missile museum I would highly recommend it. It takes us back to the history and very real threat of nuclear weapons to humanity. If you will never get a chance to visit I’ve uploaded the following video which shows a demonstration of what would happen if an order came through to the missile silo control room to launch.

The Titan II museum is well worth a visit!

The Titan II missile silo museum is highly worth a visit if you are in the area. It really is like stepping back in time to an era where the fear of nuclear war was widespread and when the existence of humanity was literally a few pushes of a button and a turn of a key away. It brings a sobering realization to just what we created and how close to the brink we are. At the same time it shows the dedication of men and women who manned their posts over 2 decades waiting for an order they prayed would never come. I had the privilege during the tour of talking to a guy named Steve who had been part of the crew and he was able to convey to me some of the pressure that they had to work under when you are guarding and responsible for one of the most powerful weapons on the planet.

So if you are ever in Arizona don’t forget to look up the Titan II missile museum. You can find information on the tours and prices on their website Titan missile museum.